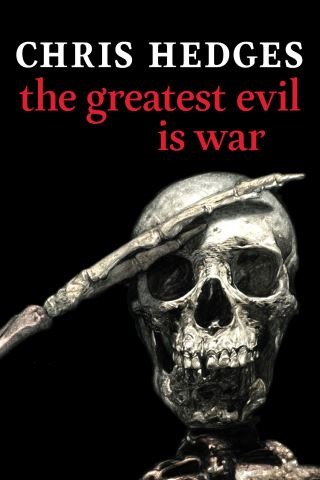 The Greatest Evil is War

An unflinching indictment of the horror and obscenity of war by one of our finest war correspondents.

Drawn from experience and interviews by Pulitzer-prize-winner Chris Hedges, this book looks at the hidden costs of war, what it does to individuals, families, communities and nations.

In fifteen short chapters, Chris Hedges astonishes us with his clear and cogent argument against war, not on philosophical grounds or through moral arguments, but in an irrefutable stream of personal encounters with the victims of war, from veterans and parents to gravely wounded American serviceman who served in the Iraq War, to survivors of the Holocaust, to soldiers in the Falklands War, among others. Hedges reported from Sarajevo, and was in the Balkans to witness the collapse of the Soviet Union.

In 2002 he published War Is a Force that Gives Us Meaning, which the Los Angeles Times described as “the best kind of war journalism… bitterly poetic and ruthlessly philosophical” and the New York Times called “a brilliant, thoughtful, timely, and unsettling book.” In the twenty years since, Hedges has not wanted to write another book on the subject of war—until now, with the outbreak of war in Ukraine. It is important again to be reminded who are the victors of the spoils of war and of other unerring truths, not only in this war but in all modern wars, where civilians are always the main victims, and the tools and methods of war are capable of so much destruction it boggles the mind. This book is an unflinching indictment of the horror and obscenity of war by one of our finest war correspondents.

Chris Hedges: CHRIS HEDGES was a war correspondent for two decades in Central America, the Middle East, Africa, and the Balkans, fifteen of them with The New York Times, where he was awarded the Pulitzer Prize. He is the author of fourteen books, including War is a Force That Gives Us Meaning, What Every Person Should Know About War and his latest, Our Class: Trauma and Transformation in an American Prison. The passages in this book are taken from his writings on war, primarily from Truthdig and ScheerPost, over the past twenty years, as well as from numerous talks and lectures. He writes a column every Monday for ScheerPost and has a show, The Chris Hedges Report, on The Real News. He holds a Master of Divinity from Harvard University and has taught at Columbia University, New York University, Princeton University and The University of Toronto. He has taught students earning their college degree from Rutgers University in the New Jersey prison system since 2010. You can find him at chrishedges.substack.com.