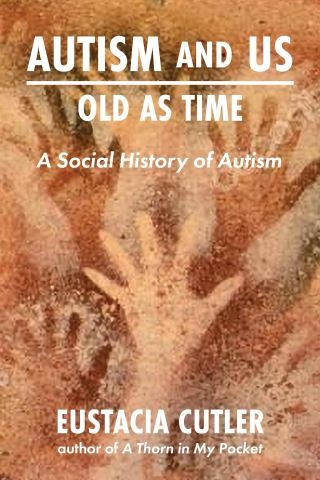 Autism and Us: Old As Time

A Social History of Autism

Autism is old and unruly. It’s been a part of us since we first left handprints on cave walls 40,000 year­­s ago. AUTISM AND US covers a long-stretch view of its neurological history and how society has judged it. With quotes from old medical records, folk-tale beliefs, and Victorian literature, the book conjures up the 19th century­ mix of ignorance, cruelty, fumbling knowledge, and surprising love that led to the first medical recognition of autism as a social disorder. From that medically significant recognition has grown our present day neurological and cognitive understanding.

Eustacia Cutler, autism expert and mother of Temple Grandin, delivers a colorful and reliable account of the pioneers it has taken for autism to gain understanding and acceptance in families, neighborhoods, schools and job markets.

Eustacia Cutler: Eustacia Cutler, Temple Grandin’s mother, earned a B.A. from Harvard, was a band singer at the Pierre Hotel in New York City, performed and composed for New York cabaret, and wrote school lessons for major TV networks. Her research on autism and other disabilities created the scripts for two WGBH television documentaries: The Disquieted and The Innocents, a prize-winning first.  Her 2006 book, A Thorn in My Pocket, describes raising her daughter, Temple Grandin, in the conservative world of the 1950s when autistic children were routinely diagnosed as infant schizophrenics. Today Cutler lectures nationally and internationally on autism and its relation to the rapidly emerging bio-neurological study of brain plasticity. She discusses what causes rigid behavior in autism, the toll it takes on the family, and how current research into the neural nature of consciousness is pointing toward insightful possibilities of change. She lives in New York.