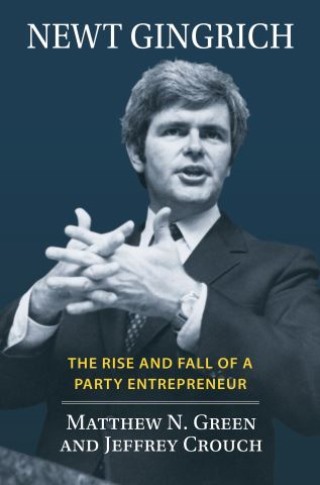 The Rise and Fall of a Party Entrepreneur

Newt Gingrich is one of the most polarizing and consequential figures in US politics. First elected to the House of Representatives in 1978, he rose from a minority party backbencher to become the first Republican Speaker of the House in forty years. Though much has been written about Gingrich, accounts of his time in Congress are incomplete and often skewed.

In their book Newt Gingrich: The Rise and Fall of a Party Entrepreneur, political scientists Matthew N. Green and Jeffrey Crouch draw from newly uncovered archival material, original interviews, and other data to provide a fresh and insightful look at Gingrich’s entire congressional career. Green and Crouch argue that Gingrich is best understood as a “party entrepreneur,” someone who works primarily to achieve their congressional party's collective goals. From the moment he entered Congress, Gingrich was laser-focused on achieving two party-related objectives—a Republican majority in the House and a more conservative society—as well as greater influence for himself.

Using a conceptual framework taken from theories of military strategy, the authors explain how Gingrich initially struggled because of a mismatch between his lofty goals and the resources available to him. After years of patiently cultivating allies, tempering his immediate objectives, and waiting for favorable circumstances to emerge, Gingrich finally claimed victory in 1994, with Republicans winning control of the House and electing Gingrich as Speaker. Yet while Gingrich had been creative, patient, and ultimately successful at gaining power for himself and his party, he proved ineffective at balancing his goals with the demands of the Speakership, and he resigned from Congress just four years later.

Newt Gingrich: The Rise and Fall of a Party Entrepreneur, the latest contribution to the Congressional Leaders series, sheds new light on a historically important congressional leader whose complicated legacy is still debated today by scholars, journalists, and politicians.

Matthew N. Green: Jeffrey Crouch is assistant professor of American politics at American University and author of The Presidential Pardon Power and coauthor of The Unitary Executive Theory: A Danger to Constitutional Government, both from Kansas. Matthew N. Green is professor of politics at The Catholic University of America and author of numerous books, including The Speaker of the House: A Study of Leadership and Underdog Politics: The Minority Party in the U.S. House of Representatives.|||