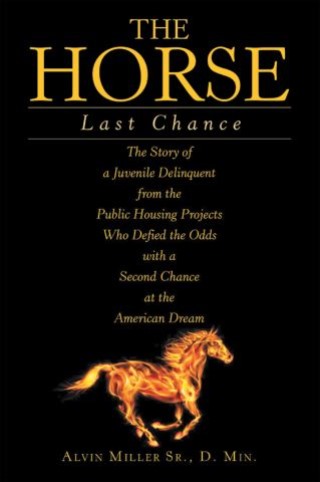 Alvin Miller Sr. dodged the bullet of destruction with the help of a seventh-grade teacher named Mrs. Rita M. Johnson.
From age six to thirteen, the author engaged in a disturbing pattern of criminal behavior. As a young lad growing up in poverty, he worked as a migrant worker and once saw his aunt shoot a man.
Despite the author’s shortcomings, Mrs. Johnson believed he had a bright future. She thought “the horse” could run for all the right reasons—instead of the wrong reasons that had been pushing him on.
Like a good physician, Mrs. Johnson knew the horse was broken, but she strived to put him back together for the running of the roses. Without his knowledge, she began working to make him better.
Find out how a compassionate teacher helped a student turn away from a life of crime so he could focus on his abilities as an athlete and academic and race to college instead of prison.

Alvin Miller Sr., D. Min. indulged in a life of crime as a boy and was disowned by his father. He was even expelled from school as a second grader. A seventh-grade teacher helped him transform his life. He went on to graduate from Eastern Kentucky University and The Southern Baptist Theological Seminary and earned his Doctor of Ministry degree from Oral Roberts University. He served more than thirty-two years in the United States Army, retiring at the rank of colonel. He has been inducted into the Sports Hall of Fame in his high school, St. Lucie County Sports Hall of Fame, and three Hall of Fame courts at Eastern Kentucky University.