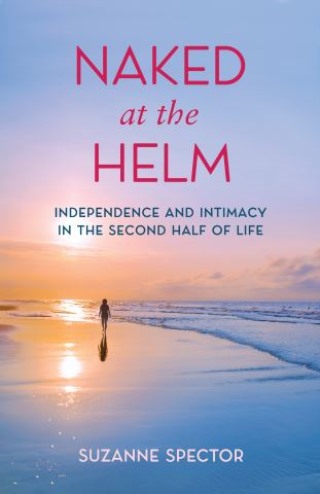 Naked at the Helm

Independence and Intimacy in the Second Half of Life

At age thirty-nine, Suzanne Spector found herself looking at what conventional 1950s thinking had brought her. Yes, she was a wife, mother of three, and successful school director. But she was also neglected in a sexless marriage, and feeling and as if the passion and juice of life had passed her by.

She began with two questions: Who am I, really? and Is it too late ?

After divorcing her husband, Suzanne set out to discover who she was as an independent woman with curiosity, questions, and lust for life. Tracing more than four decades of self-discovery and intellectual, spiritual, and creative exploration, Naked at The Helm is Spector’s story of becoming the captain of her own ship in midlife. Her adventurous journey led her from a nude beach on Ibiza at forty-one to a Siberian banya at fifty-five to a hot love affair at eighty. Her intellectual quest, meanwhile, led to a second career as director of a world-renowned psychology center, while deep friendships with women, including her daughters, sustained and nourished her through decades of global travel.

These probably would not be the tales your mother or grandmother would tell about her life, but this eighty-six-year old’s ebullient memoir of the second half of her life will move you to weave some rich new yarns into the tapestry of your own story. And no, it’s not too late.

Suzanne Spector: Suzanne Spector is a graduate of Barnard College and holds a master’s degree from the Columbia University School of Social Work. She was Coordinator of the American Montessori Teacher Training Program, then founded and directed The Center for Open Education, an innovative school, before becoming the Director of the Center for Studies of the Person. At age fifty-six, she earned her PhD from The Union Institute. At age seventy-seven, she began to write. Her essays My Path to CSP and A Deeper Listening were published in the anthology A Place to Be: CSP at Fifty (2017) . Her short story Dancing Heart Emoji won the 2019 SDMWA Memoir Showcase Award and was published in Shaking the Tree: Volume Three (2021). Naked at the Helm was accepted for publication by She Writes Press when Suzanne was eighty-five years old.