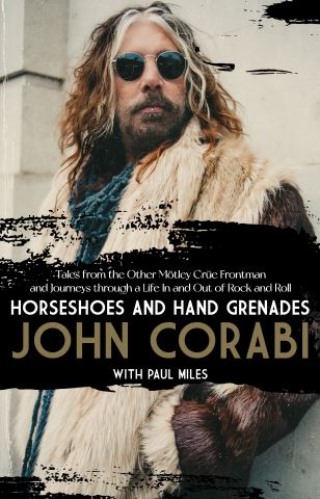 Horseshoes and Hand Grenades: Tales from the Other Mötley Crüe Frontman and Journeys through a Life In and Out of Rock and Roll

In Horseshoes and Hand Grenades, John Corabi recounts his life from the mean streets of Philadelphia to the Sunset Strip. Take a look behind the scenes at Corabi’s time fronting Mötley Crüe, Union, and The Dead Daisies, as well as his time playing rhythm guitar with Ratt and even his stint as a long-haul trucker. Whether it’s detailing his parents difficult divorce, his family’s dark history of abuse, his run-in with a serial killer, or simply the best way to arrive at a wedding—which maybe is by helicopter and maybe it isn’t—he pulls no punches and outlines the good and bad of it all in this raucous autobiography.

John Corabi: Paul Miles is the historian of one of rock’s most reckless and biggest-selling bands of all time: Mötley Crüe. Having continuously documented the facts behind their sex, drugs, and rock-and-roll lifestyle for decades via his Chronological Crue website and book series, he was asked to contribute to the band’s best-selling autobiography The Dirt in 2001. His titillating confessional Sex Tips from Rock Stars was published worldwide in 2010, and his photography collection Before I Hit the Stage: Backstage Rock’n’Roll Moments in New York City was released in 2015. He currently lives in Melbourne, Australia.