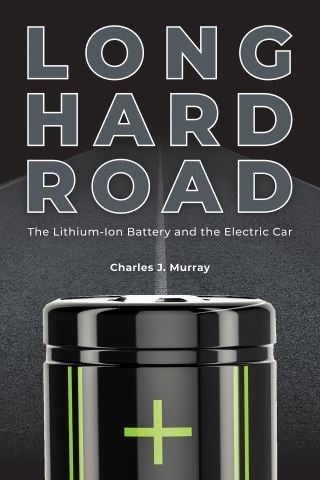 The Lithium-Ion Battery and the Electric Car

Long Hard Road: The Lithium-Ion Battery and the Electric Car provides an inside look at the birth of the lithium-ion battery, from its origins in academic labs around the world to its transition to its new role as the future of automotive power. It chronicles the piece-by-piece development of the battery, from its early years when it was met by indifference from industry to its later emergence in Japan where it served in camcorders, laptops, and cell phones. The book is the first to provide a glimpse inside the Japanese corporate culture that turned the lithium-ion chemistry into a commercial product. It shows the intense race between two companies, Asahi Chemical and Sony Corporation, to develop a suitable anode. It also explains, for the first time, why one Japanese manufacturer had to build its first preproduction cells in a converted truck garage in Boston, Massachusetts.

Building on that history, Long Hard Road then takes readers inside the auto industry to show how lithium-ion solved the problems of earlier battery chemistries and transformed the electric car into a viable competitor. Starting with the Henry Ford and Thomas Edison electric car of 1914, it chronicles a long list of automotive failures, then shows how a small California car converter called AC Propulsion laid the foundation for a revolution by packing its car with thousands of tiny lithium-ion cells. The book then takes readers inside the corporate board rooms of Detroit to show how mainstream automakers finally decided to adopt lithium-ion.

Long Hard Road is unique in its telling of the lithium-ion tale, revealing that the battery chemistry was not the product of a single inventor, nor the dream of just three Nobel Prize winners, but rather was the culmination of dozens of scientific breakthroughs from many inventors whose work was united to create a product that ultimately changed the world.

Charles J. Murray: Charles J. Murray has written about science and technology for thirty-five years, during which he has published more than five hundred articles on electric cars and batteries. His work has appeared in engineering journals such as Design News, EE Times, and Semiconductor International, as well as in many consumer publications, including the Chicago Tribune and Popular Science. He is a recipient of numerous editorial awards, including the Jesse H. Neal Award for business journalism. Murray is also the author of The Supermen: The Story of Seymour Cray and the Technical Wizards Behind the Supercomputer. He lives in the Chicago area and is an engineering graduate of the University of Illinois at Chicago.