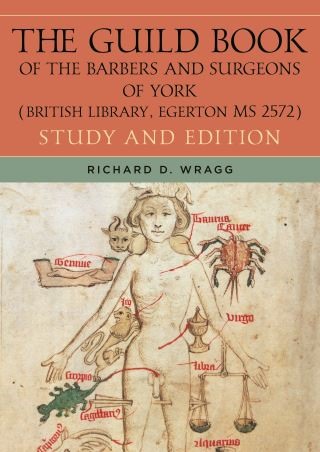 The Guild Book of the Barbers and Surgeons of York (British Library, Egerton MS 2572)

Produced in 1486 and subsequently augmented, the Guild Book of the Barbers and Surgeons of York (British Library Egerton MS 2572) is a unique record of the knowledge, ambitions, activities and civic relationships maintained by the Barbers and Surgeons Guild over a period of 300 years. The manuscript's earliest folios contain images, astrological tracts, a plague treatise and a bloodletting poem. To these were added early modern ordinances and oaths, a series of royal portraits, and the names of the Guild's masters and apprentices. It is a rare survival of late medieval medical knowledge placed within a civic context.

This new multi-disciplinary examination of the York Guild Book presents a comprehensive edition of its content and a detailed study of the creation and use of this fascinating manuscript. The York Guild Book was not owned by any one person but was intended to be representative of the types of manuscripts the Guild's members might have individually possessed. The Guild's commission elevated their manuscript's functional content into something which could be proudly owned and displayed, as is demonstrated by the stylishly executed pen and ink drawings, two of which are possibly unique. Through a contextualisation of the form and content of the manuscript, the book articulates ideas about material culture and the ceremonial role of secular manuscripts whilst shedding new light on the dissemination and status of medieval medical texts.