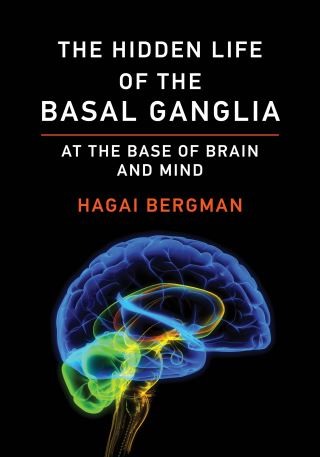 The Hidden Life of the Basal Ganglia

At the Base of Brain and Mind

The anatomy and physiology of the basal ganglia and their relation to brain and behavior, disorders and therapies, and philosophy of mind and moral values.

The main task of the basal ganglia—a group of subcortical nuclei, located at the base of the brain—is to optimize and execute our automatic behavior. In this book, Hagai Bergman analyzes the anatomy and physiology of the basal ganglia, discussing their relation to brain and behavior, to disorders and therapies, and even to moral values. Drawing on his forty years of studying the basal ganglia, Bergman presents new information on physiology and computational models, Parkinson’s disease and other ganglia-related disorders, and such therapies as deep brain stimulation.
Focusing on studies of nonhuman primates and human basal ganglia and relying on system physiology and in vivo extra-cellular recording techniques, Bergman first describes the major brain structures that constitute the basal ganglia, the morphology of their cellular elements, their synaptic connectivity and their physiological function in health and disease. He discusses the computational physiology of the healthy basal ganglia, describing four generations of computational models, and then traces the computational physiology of basal ganglia–related disorders and their treatments, including Parkinson’s disease and its pharmacological and surgical therapies. Finally, Bergman considers the implications of these findings for such moral concerns as free will. Explaining this leap into domains rarely explored in neuroscientific accounts, Bergman writes that the longer he studies the basal ganglia, the more he is convinced that they are truly the base of both brain and mind.

Hagai Bregman: Hagai Bergman is Simone and Bernard Guttman Chair in Brain Research and Professor of Physiology in the Edmond and Lily Safra Center (ELSC) for Brain Research and Faculty of Medicine at the Hebrew University of Jerusalem.