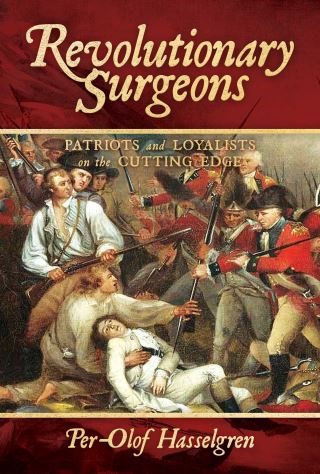 Patriots and Loyalists on the Cutting Edge

Revolutionary Surgeons offers an integrated picture of surgeons as political and military leaders of the American Revolution.

Prominent surgeons participated in political activities that ultimately resulted in the breakaway of the colonies from Britain. Surgeons were members of the Sons of Liberty and other groups opposing Acts imposed on the colonies by Parliament.

Similar to other groups in society, surgeons were split in their view of the growing opposition against the English rule of the American colonies and the wish to create an independent nation. Even with different opinions of the revolution, Loyalists and Patriots were often able to get along and live peacefully in the same communities.

Surgery underwent dramatic developments during the 1700s. Although anesthesia was still a century in the future, surgeons performed extensive procedures, including laparotomies (opening of the abdomen) for tumors, mastectomies for cancerous growths, amputations of the leg above or below the knee, and cutting for the stone (removal of bladder stones). An increased understanding of human anatomy was one reason why surgeons kept moving the boundaries of what was considered possible. With no anesthesia, patients’ screams from pain and horror were unimaginable. Many patients died from shock on the operating table or from postoperative bleedings and infections.

Stories about surgeons as leaders of the American Revolution and about their heroic surgical procedures provide for an exciting read.

Per-Olof Hasselgren: Dr. Hasselgren is a surgeon at the Beth Israel Deaconess Medical Center in Boston. He is the Distinguished Professor of Surgery at Harvard Medical School. He has a longstanding interest in surgical and American history.