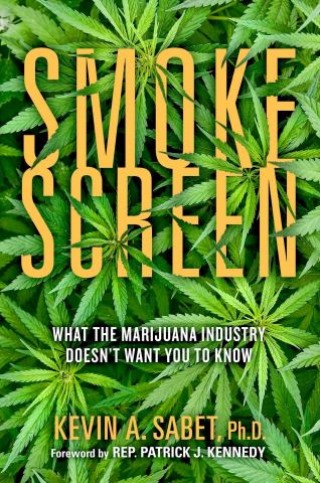 What the Marijuana Industry Doesn't Want You to Know

From the leading authority on marijuana—a man who has served as White House advisor on drugs to three different administrations and who NBC News once called “the prodigy of drug politics"—comes the remarkable and shocking exposé about how 21st century pot, today’s new and highly potent form of the drug, is on the rise, spreading rapidly across America by an industry intent on putting rising profits over public health.

Smokescreen: What the Marijuana Industry Doesn't Want You to Know examines the inside story behind the headlines, containing accounts from Sabet’s time in the Obama administration to stunning revelations from whistleblowers speaking out for the first time. What it finds is how the marijuana industry is running rampant without proper oversight, leaving Americans’ health seriously at risk.

Included are interviews with industry insiders who reveal the hidden dangers of a product they had once worshipped.

Also contained in these pages are insights from a major underground-market dealer who admits that legalization is hastening the growth of the illicit drug trade.

And more to the heart of the issue are the tragic stories of those who have suffered and died as a result of marijuana use, and in many cases, as a result of its mischaracterization. Readers will learn how power brokers worked behind the scenes to market marijuana as a miracle plant in order to help it gain widespread acceptance and to set the stage for the lucrative expansion of recreational pot.

The author of this compelling first-person narrative leading the national fight against the legalization of cannabis through his nonprofit, Smart Approaches to Marijuana (aka SAM) is Kevin Sabet. As a policy advisor to everyone from county health commissioners to Pope Francis, and a frequent public speaker on television, radio and through other media outlets, his analysis is consistently relied upon by those who recognize what’s at stake as marijuana lobbyists downplay the risks of massive commercialization.

A book several years in the making, filled with vivid characters and informed by hundreds of interviews and scores of confidential documents, Sabet's Smokescreen lays bare the unvarnished truth about marijuana in America.

Kevin A. Sabet: Dubbed by NBC News as the “prodigy of drug politics” and by Salon as the “quarterback of the new anti-drug movement,” author, consultant, advisor to three U.S. presidential administrations, and assistant professor Kevin A. Sabet, Ph.D., has studied, researched, written about, and implemented drug policy for more than 20 years. He is currently the president and CEO of SAM (Smart Approaches to Marijuana), a nonprofit organization he founded with former Representative Patrick Kennedy and David Frum. Sabet’s book Reefer Sanity: Seven Great Myths About Marijuana was published by Beaufort (Midpoint) in 2013. He is also the co-editor of Marijuana and Contemporary Health, published by Oxford University Press, and an assistant adjunct professor at Yale University.

Sabet’s work as a government advisor began in the Clinton administration as a researcher, and he was the senior speechwriter on drug policy in the Bush administration (2002–2003). He returned to government in 2009 when he was asked to assist in drafting President Obama’s National Drug Control Strategy as a senior advisor. In 2011, he stepped down after being the only drug policy staffer to have served as a political appointee in Democrat and Republican administrations.

Sabet has since been profiled in Politico, Crain’s Business, Salon magazine, the International Business Times, the Daily Beast, Vox, and many other publications as America’s point person on drug policy issues. He has spoken at the Allen & Co. Sun Valley Conference, the Aspen Ideas, New Yorker, and Politicon festivals, at the Puebla Ideas Conference to debate the former presidents of Mexico and Colombia, on the Organization of American States blue ribbon commission advising hemispheric drug policy, and in hundreds of forums and discussions. He has been featured on the front page of The New York Times and in virtually every major media publication and news channel on the subject of drug policy. He has published op-eds in The Washington Post, The New York Times, Los Angeles Times, and dozens of other publications. Dr. Sabet’s regular blog is housed at HuffPost and two of his op-eds have earned him a “Five Best Columns” distinction by The Atlantic.

In 2013, Sabet co-founded, SAM, which advocates for a public-health-based marijuana policy. He leads an advisory group comprising the most prominent scientists in the field of marijuana research. As the director of the Drug Policy Institute at the University of Florida, Department of Psychiatry, Division of Addiction Medicine, he is the author of numerous monographs and peer-reviewed journal articles.

Dr. Sabet regularly advises foreign governments, several non-governmental organizations working to reduce drug abuse and its consequences, and serves in an international role as an advisor in various capacities to the United Nations and other multinational organizations.

Dr. Sabet is the winner of numerous drug policy awards, including the 2014 Nils Bejerot Award for Global Drug Prevention, given at Stockholm City Hall by the anti-drug organization chaired by H.M. Queen Silvia of Sweden, the 2019 National Narcotics Lifetime Achievement Award, and the John P. McGovern Award for Drug Prevention given by the Institute for Behavior and Health and Robert DuPont, the founding director of the National Institute on Drug Abuse. Sabet received his Doctorate of Philosophy and Masters of Science from Oxford University as a Marshall Scholar in 2007 and 2002, respectively, and his B.A. with high honors in Political Science from the University of California, Berkeley.