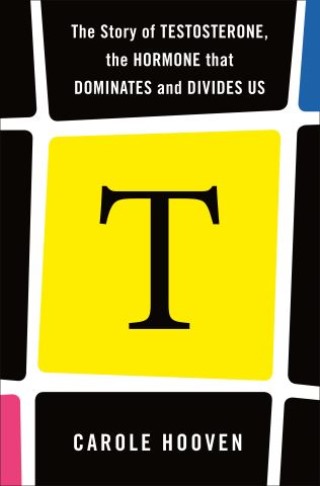 T: The Story of Testosterone, the Hormone that Dominates and Divides Us

Through riveting personal stories and the latest research, Harvard evolutionary biologist Carole Hooven shows how testosterone drives the behavior of the sexes apart and how understanding the science behind this hormone is empowering for all.

Since antiquity—from the eunuchs in the royal courts of ancient China to the booming market for “elixirs of youth” in nineteenth-century Europe—humans have understood that typically masculine behavior depends on testicles, the main source of testosterone in males. Which sex has the highest rates of physical violence, hunger for status, and desire for a high number of sex partners? Just follow the testosterone.

Although we humans can study and reflect on our own behavior, we are also animals, the products of millions of years of evolution. Fascinating research on creatures from chimpanzees to spiny lizards shows how high testosterone helps males out-reproduce their competitors. And men are no exception.

While most people agree that sex differences in human behavior exist, they disagree about the reasons. But the science is clear: testosterone is a potent force in human society, driving the bodies and behavior of the sexes apart. But, as Hooven shows in T, it does so in concert with genes and culture to produce a vast variety of male and female behavior. And, crucially, the fact that many sex differences are grounded in biology provides no support for restrictive gender norms or patriarchal values. In understanding testosterone, we better understand ourselves and one another—and how we might build a fairer, safer society.

Carole Hooven: Carole Hooven, PhD, is lecturer and codirector of undergraduate studies in the Department of Human Evolutionary Biology at Harvard University. She earned her PhD at Harvard, studying sex differences and testosterone, and has taught there ever since. Hooven has received numerous teaching awards, and her popular Hormones and Behavior class was named one of the Harvard Crimson’s “top ten tried and true.”