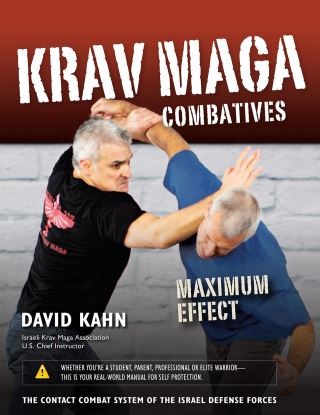 BECAUSE NOT ALL KRAV MAGA IS THE SAME®

Combatives are the foundation of krav maga counter-attacks. These are the combatives of the original Israeli Krav Maga Association (Grandmaster Gidon).

It is irrefutable that you need only learn a few core combatives to be an effective fighter. Simple is easy. Easy is effective. Effective is what is required to end a violent encounter quickly, decisively, and on your terms. This book stresses doing the right things and doing them in the right way. Right technique + Correct execution = Maximum Effect.

Whatever your martial arts or defensive tactics background or if you have no self-defense background at all, this book can add defensive combatives and combinations to your defensive repertoire. Our aim is to build a strong self-defense foundation through the ability to optimally counter-attack.

David Kahn serves as the Israeli Krav Maga Association's U.S. Chief Instructor and teaches federal, state, and local law enforcement agencies along with all branches of the U.S. military. David is the only American ever to sit on the non-profit Israeli Krav Maga Association's board of directors. David is also a certified instructor through the New Jersey Police Training Commission and Mercer County Police Academy and also teaches at the New Jersey State Police Academy.